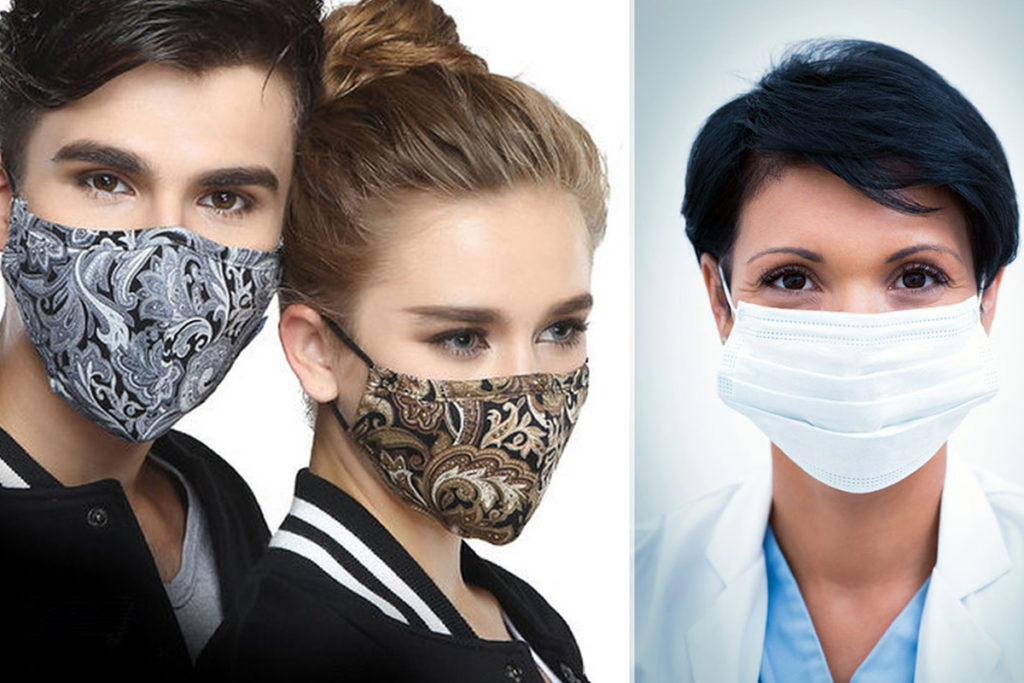 If there is a symbol of the current confusion and fear, the misinformation and anxiety, generated by the spread of the new corona virus, it is the surgical face mask. When history looks back on the pandemic of 2020, those white or baby blue rectangles that hide the mouth and nose, turning everyone into a muzzled pelican, will be what we see. The masks began appearing almost immediately after the infection was identified, first in Asia, where masks were already common, and then in Europe. These days they are everywhere. Now photographs of people in masks illustrate almost every news article about the virus, on front pages and social media alike. After all, the contagion itself is intangible: a microscopic organism resting on hard surfaces, transmitted through the air in water droplets from infected individuals. It can’t be seen.

Even more than bottles of hand sanitizer and disinfectant wipes, the mask has become the virus’s avatar; shorthand for our looming dread, desire to hide, inability to protect ourselves, and desire to do something — anything — to appear to take action. In this it is simply the latest iteration of an object (an accessory?) that has occupied an outsize role in various cultures and our unspoken forms of communication since it was created in the mid-1890s. Face masks — the mouth-and-nose-covering kind, as opposed to the eye-covering kind or the Michael Myers kind, both of which have their own history and set of associations — have long been a fraught symbol. They have represented safety and protection from disease and pollution; solidarity; protest; racism; a fashion trend; and now, pandemic. They have been, said Christos Lynteris, a medical anthropologist at the University of St. Andrews in Scotland, a sign of “something that hides but also communicates.” It is, he said, “an interesting dialectic, and one very dependent on context.”

How what did is essentially some gauze held on by straps take on so much meaning?

According to “History of Surgical Face Masks: The myths, the masks, and the men and women behind them,” by John L. Spooner, face masks first appeared at the very end of 19th century, used as a protective measure worn by doctors during surgery to prevent airborne bacteria from entering an open wound.

They were then adopted in 1910 by the Chinese authorities to prevent the spread of pneumonic plague and, Mr. Lynteris said, became “emblematic of medical modernity. They had a double function — both to stop germs and to transform people into scientifically minded citizens.” Eight years later, they became a global phenomenon, when they were widely adopted as protection against the Spanish flu. “You can see masks in drawings of fashionably dressed people with masks,” Mr. Lynteris said. “There was a popular acceptance of the mask as part of life.” Though use of the masks receded afterward World War I, they remained popular in China, where masks symbolized care for the community and civic awareness, “even in Communist public health campaigns,” Mr. Lynteris said.

Then came the SARS epidemic, beginning in 2002, and a mask resurgence, in China, Hong Kong and across most of East Asia and Southeast Asia, as well as in the public mind, as a sign of “heath awareness and civic duty.” It is sheer politeness to wear a mask to avoid sneezing on your neighbor. At the same time, as awareness of environmental degradation, pollution and air quality has become a growing topic of conversation; masks took on a different role: as air filters in urban centers and harbingers of the climate crisis — not just in such cities as Mumbai, Beijing, Tokyo and Mexico City, but also, more recently, during the bush fires in Australia. “There is a certain ‘Blade Runner’-y feeling of embracing our fashionable dystopia that I enjoyed,” one young Australian said in The Guardian of why he had embraced the face mask.

Little wonder fashion took note — fashion always does, when it comes to items that signal identity — and sensing opportunity, rose to meet it. The Qiaodan Yin Peng Sportswear collection put face masks on the runway during China Fashion Week in 2014. Masha Ma, a Chinese designer showing in Paris, featured a Swarovski-studded look in her spring 2015 show. Masks were adopted as expressions of — or challenges to — creative identity by the rappers Ayleo and Mateo Bowles (Ayo & Teo), who started wearing them, they told Billboard, because people were making fun of their facial expressions; soon they had become their signature accessory.

Future and his daughter wore matching elaborate gem-studded looks to the 2017 BET awards as a promo for his performance of “Mask Off.” Zoe Dupree, the stylist for Young Thug, christened the styles “smog couture.” Over the last three years, brands including Off-White, Palm Angels, Bathing Ape and Fendi have offered designer face masks. Gucci made one for Billie Eilish to wear with her all-Gucci look at the Grammys, as part of her message that her body is her own, for her eyes only. Less than a month ago, celebrities and models began to post selfies in their masks on social media — most often from airplanes, but also from the street. Here was Bella Hadid on her flight out of Milan, in fedora, scarf and surgical face mask. There was Gwyneth Paltrow en route to Paris in a black Nemen x Airinum breathing mask. Masks were handed out at fashion shows. Sometimes guests wore special, customized styles. Someone at Chanel put camellias on hers. At Fendi, there were double Fs.

Today there are pages and pages of face masks on Etsy. Most of them are simply pieces of fabric with straps, decorated with puppy dogs, Wonder Woman, Star Wars, rainbows and other designs, and ranging from $6.99 to about $40. They became so common that in 2019 NSS, the Italian digital zine, described them as “the real must-have accessory, both in terms of utility and coolness, of the 21st century.” More recently, during the Hong Kong pro-democracy protests, face masks (and especially black face masks) were worn as both a political statement and as a tool for disguising identity from closed-circuit TV cameras. They became so popular that the government went so far as to try to ban them, immediately elevating them to a symbol of revolt. But because the masks have become so embedded in Asian culture, they have also become shorthand for racism, especially during a blame game about how the corona virus, first identified in China, began. (The New York Times, along with other news organizations, was accused of perpetrating a stereotype when it used a photograph of Asians in face masks in an article about the outbreak in New York. It changed the picture.) Now “they feel like a scarlet letter,” Connie Wang, a fashion reporter, wrote in Refinery. To Americans and Europeans, they can be a sign of otherness and culpability, as well as an implicit accusation.

The Masks Around Us

In part because we attribute so much meaning to the human face and its expressions, to cover it, to hide what is the most naked, accessible, part of yourself, can be deeply unsettling and alienating to those around us. A lot is always made about the eyes being the window to the soul and blah blah blah, but the mouth is as important a guide to emotions. It’s part of how we read one another’s feelings. To obscure that can feel like a rebuke.

“A mask creates a barrier between you and the world,” said Marine Serre, a young French designer who often works with environmental issues and upcycling and who began offering antipollution face masks in 2019 because she is a cyclist. “It protects you, but it also means you can’t get close to someone.”

Ms. Serre produces her masks, which she showed during Paris Fashion Week at the end of February, in collaboration with the Swedish company Airinum. (A number of specialty mask makers have sprung up in recent years to meet consumer demand, including Vogmask in San Francisco, the Cambridge Mask Co. in England and AusAir in Australia.) And though Ms. Serre does not recommend them for viral protection, she has noticed a change in the reception.

In the past, the masks made many viewers uneasy, Ms. Serre said, but not this season. “People were more and more enthusiastic about it,” she said. “But it’s not really a positive thing, I think.” It’s an awkward conversation to have. To sell masks at a premium, as many brands do, during a crisis, can seem like profiteering. Not to mention a perpetuating of class difference. Who can afford to pay for the protection of their choice? And given the medical messages about masks and the new corona virus, and the fact they don’t necessarily work as a barrier for healthy people, it could also be seen as spreading misinformation.

Perhaps we will reach the point where wearing a mask will be seen, as it is in Asia, as a sign of care and a gesture of community. Where wearing a mask is not a sign of fear and difference, but of human commonality. Perhaps they will remain an uneasy subject, representation of a catering society. Either way, there is no question that this kind of mask, like the tribal ones the anthropologist Claude Lévi-Strauss wrote about in “The Way of the Masks,” will continue to be layered with the myths that we write to explain our own history. And either way, they are not going away. As Mr. Lynteris pointed out, “Masks are very hard to get now.” And when things become scarce, they also become “very desirable.” Currently there is an Off-White mask with an asking price of $399 on Stock X.