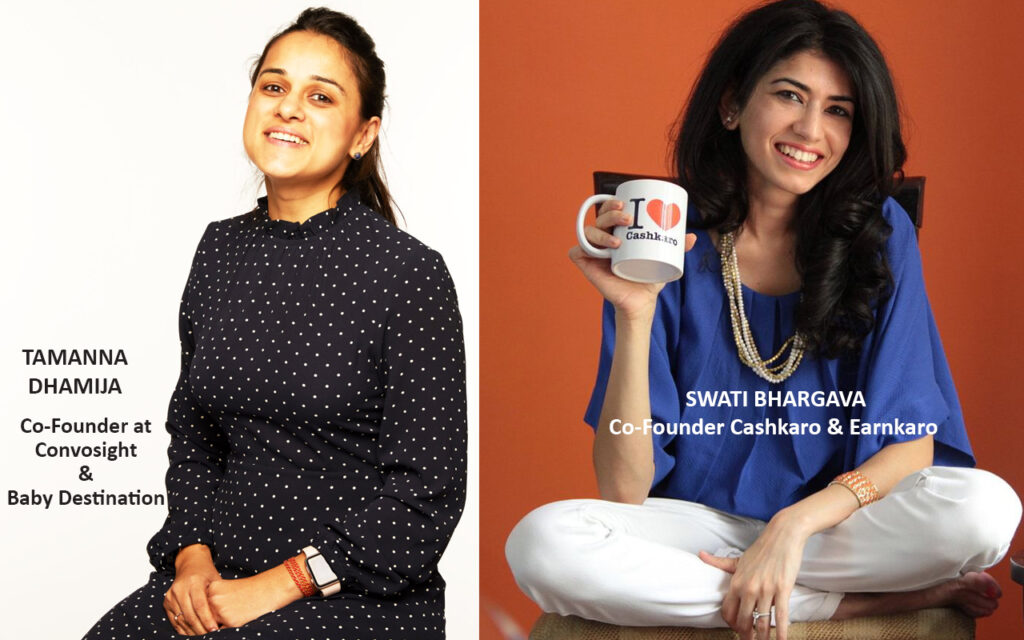 The Indian economy is witnessing a massive digital transformation. From large enterprises to SMBs and startups, innovation powered by technology is no longer a choice but a necessity. In the midst of this transformation, there are a few entrepreneurs who are not just scaling their businesses rapidly but also driving societal impact through technology. That’s what ties Swati Bhargava, Co-founder, CashKaro and EarnKaro, and Tamanna Dhamija, Founder and CEO, Convosight together – the need to create impact.

Swati set up the cashback platform CashKaro to add more to a user’s shopping experience – from giving them value for their money to giving back real money.

Tamanna on the other hand founded Convosight with an aim to empower Facebook group admins to monetise their pages. “At Convosight, we’re building the first-ever community management and monetisation platform for Facebook group admins, which is a completely underserved cohort. There are so many passionate community managers out there, across 10 million Facebook groups, who left their jobs to manage their communities full-time, without even thinking how it’ll be monetised or sustained. We are on a mission to help them earn a sustainable income from their communities,” says Tamanna.

A gap to fill

While CashKaro and Convosight boast millions of users today, the seeds of motivation to set them up emerged from personal experiences.

Over a decade ago, Swati and her husband Rohan were booking their honeymoon tickets when they received Rs 25,000 on a cashback website in the UK. The couple was amazed by the concept and they launched their first cashback and coupons site in the UK called Pouring Pounds. “Given its rapid success in the European market, we knew we had to bring the concept to India. Soon enough, we raised our Series A round of funding from Kalaari Capital and Ratan Tata, and consequently Series B as well,” says Swati.

Meanwhile, when Tamanna launched her first venture, Baby Destination in 2018, she realised it was a tedious and difficult task to manage a page. Community managers not only have to build tools for day-to-day community management, but also work on monetising the page by partnering with brands. Through it all, she realised the lack of companies in the market that helped online community creators generate income. This led to the launch of Convosight.

While Swati was risking a steady career in Goldman Sachs London to launch CashKaro, Tamanna wondered how to put her idea into action for Convosight.

One of the biggest reasons for the growth of CashKaro, according to Swati, is its people. The team’s efforts resulted in CashKaro having over 5 million registered users, who get savings from 1,500+ e-commerce sites. “The business lies in its people. They grow, I grow, CashKaro grows; no wonder CashKaro is a ‘Great Place to Work’ certified organisation,” she says.

Tamanna says that the real motivation to do something for creators struck her when Baby Destination got selected by Facebook for a community leadership program, along with 99 other global community leaders. Meeting talented individuals who could not sustain their community pushed her to work on her dream. Despite the initial sleepless nights, Convosight went on to pay $1 million to community creators since March 2020. Currently, 50,000+ communities manage over 400 million members through Convosight.

Swati feels that women are multitaskers who have the ability to approach situations with both objectivity and empathy, making them true leaders. “I am an entrepreneur first and a woman second. Be it my high school Singapore days, presiding over the largest society at London School of Economics (LSE) or at Goldman Sachs, I believe you need to approach each situation on merit, and know what you are doing to make the most of these experiences,” she says.

As a small-town girl and being the first woman in her family to bag an international scholarship, Swati claims to resonate with the journeys of various women working at CashKaro. “A one-size-fits-all mantra is a plain no when it comes to creating policies. Women, especially working mothers, require more flexibility and companies are increasingly validating and encouraging this trend,” she says.

Tamanna echoes similar sentiments by adding that women are natural workers and have better intuition to sense and grab opportunities. For her, the path towards success starts with the desire and willingness to do more. “Willingness to understand, to implement, to learn, and to go the extra mile to make things happen,” she says.

For Tamanna, women empowerment means redefining a woman’s sense of self-worth. “I strongly agree with the saying that ‘Empowered women empower women. And that’s what we’re doing at Convosight by creating a safe environment for women, showcasing gender diversity, and inculcating a culture of inclusivity,” she adds.

For Shweta and Tamanna, AWS played a key role in elevating their services and helping them make a difference. AWS technology not only helps CashKaro centralise all their data and access it on-demand for analysis but also helps them manage their servers, provide infrastructure security, assess potential security risks, protect sensitive cloud data, and manage access. Tamanna adds that Convosight leverages AWS Serverless Architecture to provide a scalable and highly available monetisation platform. By using various components of AWS Serverless Stack, engineering teams at Convosight worry less about infrastructure complexities and cost issues and focus on delivering direct value to their user base.