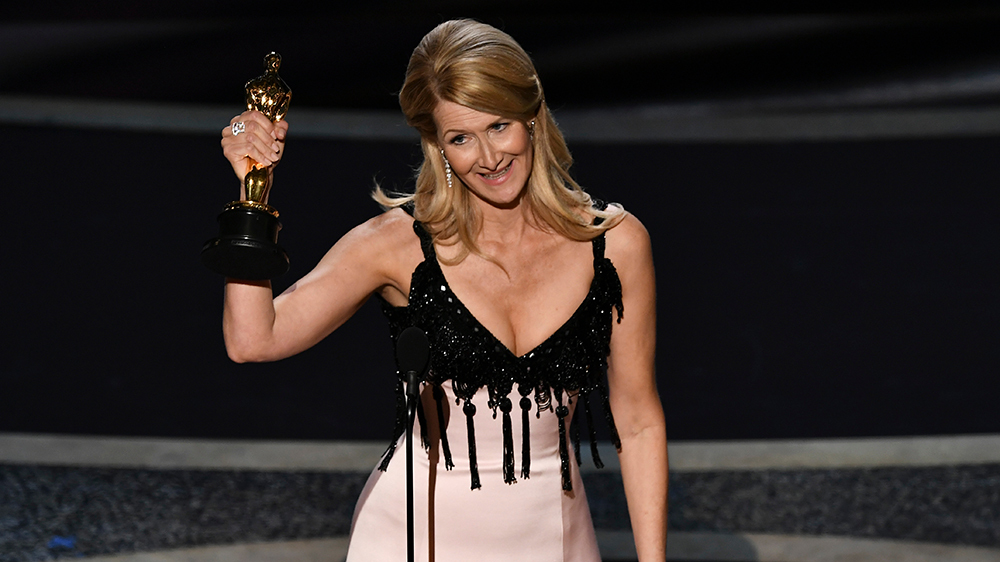 How many Oscars is that now? One but she’s been nominated twice before – for best supporting actress in 2014’s Wild, and for best actress in 1991’s Rambling Rose.

What’s next? She’s set to resume her role as pale botanist (yes, that’s a real job) Dr. Ellie Sattler in Jurassic World, the third instalment of the rebooted dinosaur franchise.

Laura Elizabeth Dern (born February 10, 1967) is an American actress, director and film producer. She is the recipient of numerous accolades, including an Academy Award, a Primetime Emmy Award, and five Golden Globe Awards.

Dern embarked on an acting career in the 1980s and rose to prominence following her performance in David Lynch’s Blue Velvet (1986). She then received an Academy Award nomination for Best Actress for her portrayal of the titular orphan in the drama film Rambling Rose (1991). She achieved international recognition following her role in the adventure film Jurassic Park (1993), after which she guest starred in the “Puppy Episode” of the sitcom Ellen in 1997, during which Ellen DeGeneres publicly came out.

After obtaining two Golden Globe Awards for her performances as Katherine Harris in the television film Recount (2008) and Amy Jellicoe in the comedy-drama series Enlightened (2011–2013), Dern received an Academy Award nomination for Best Supporting Actress for her work in Wild (2014). In 2017, she began starring as Renata Klein in the drama series Big Little Lies, winning the Primetime Emmy Award for Outstanding Supporting Actress in a Limited Series or Movie, and reunited with David Lynch for Twin Peaks: The Return. She has since played supporting roles in the film’s Star Wars: The Last Jedi (2017), Marriage Story (2019), and Little Women (2019). Her performance in Marriage Story earned her a fifth Golden Globe Award and the Academy Award for Best Supporting Actress.