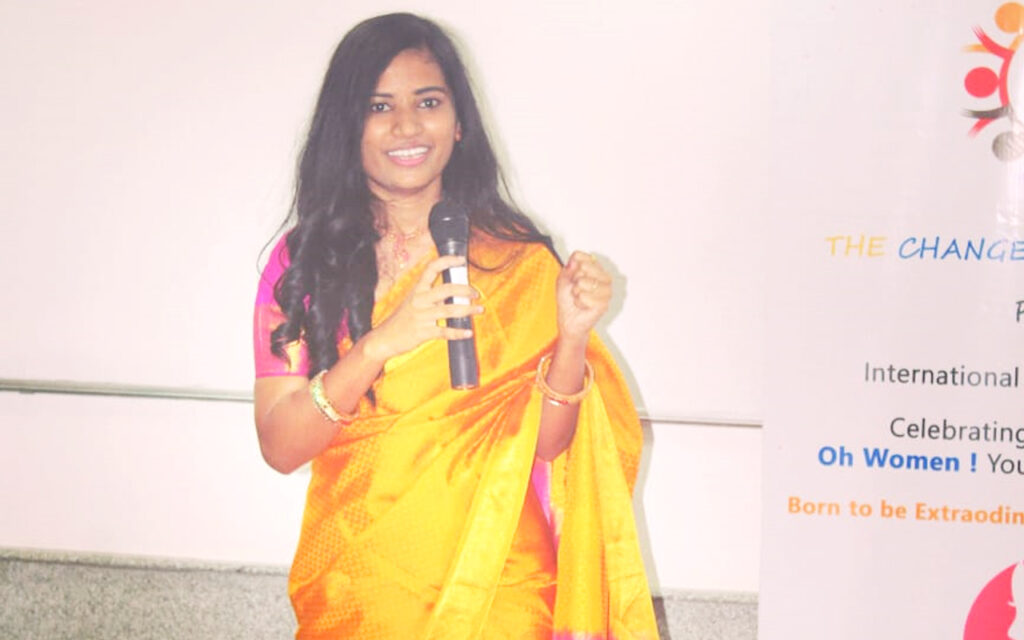 Lavanya is an Inspiration to Indian Women

Lavanya Gudelli sees development as a gradual process of expanding freedoms equally for all people. Gender equality, from this perspective, is a core objective of development in itself implying that. She has worked hard to break the myths around periods. Many Indian women from rural areas have started using sanitary pads because of the initiatives taken by Lavanya Gudelli. Her dedication and sincerity towards the cause of protecting rural women from Reproductive Tract Infections and Urinary Tract Infections are truly inspiring.

Lavanya Gudelli was born in the small village Mariepda of Mahabubabad district of Telangana to the farmer. They did not have much in terms of money or property. However, Lavanya did not let this stop her from pursuing higher education. In a village, where most girls get married after completing schooling, Lavanya dared to move out of the village to pursue higher studies.

If you are interested in social services, you’ll find Lavanya Gudelli story truly inspiring. We “Be the Change” Career Foundation: Advocating Social Justice and Change. It will also make you ready to face the unique challenges of doing social work in India. Lavanya started on her own, leaving the comforts of life in a developed country to improve the lives of women in her homeland.

Lavanya says her father’s never-give-up attitude has a great influence on her. As she grew, she started to feel deeply moved by the plight of the unfortunate, underprivileged people around her. A secret desire took birth in the heart. She was in search of ways and means to accomplish her aim. Her endeavours bore fruit in August 2018. Defying all odds, she started her own NGO, based on the Gandhian quote that has always been her source of inspiration and motivation.

That was just the first hesitant step. She decided to feed the hungry and the needy. But she had no clue where to start. So she randomly went to a nearby slum to distribute food. While interacting with the people, she realized that they were struggling for even the basic things that are taken for granted by the privileged classes.

Soon, as word of her efforts spread and goodwill grew, other like-minded youth joined. She was soon able to raise a platform for youth to share ideas and views. Yet, today’s development realities beg the question as to whether we are achieving this objective sufficiently and in a reasonable timeframe. Although there has been considerable and important progress in terms of women’s well-being (in rights, education, health and access to jobs etc), what of their ‘ill-being’? It is still the case that NO country treats it, women, the same as its men.

“Things have changed for the better, but not for all women and not in all domains of gender equality. Progress has been slow and limited for some women in very poor countries, for those who are poor, even amid greater wealth, and for those who face other forms of exclusion because of their caste, disability, location, ethnicity, or sexual orientation. Whether comparisons between men and women in the same country or absolute comparisons of women across countries, the progress in some domains is tempered by the sobering realities that many women face in others”.

In this module, she has chosen to focus specifically on women per se, and not gender in general for a number of reasons and to highlight a number of important issues. But, she used her sufferings to inspire herself to help others. She pledged that no other girl from her country would have to face this kind of unnecessary pain. Lavanya wanted to solve health, hygiene and lack of awareness in terms of the government schemes that are available. “Lack of sanitation is a major concern in slums and also, most of these people don’t know about the various government schemes they can avail. Lavanya has already won multiple awards like Pride of Hyderabad, Youth Icon of India 2019 and more. But also gave away many awards on March 8th on the occasion of Women’s Day. Be the Change Makers has recently completed three years. Now she has a family of around 200 people and wishes to expand it further serving the people across the country.