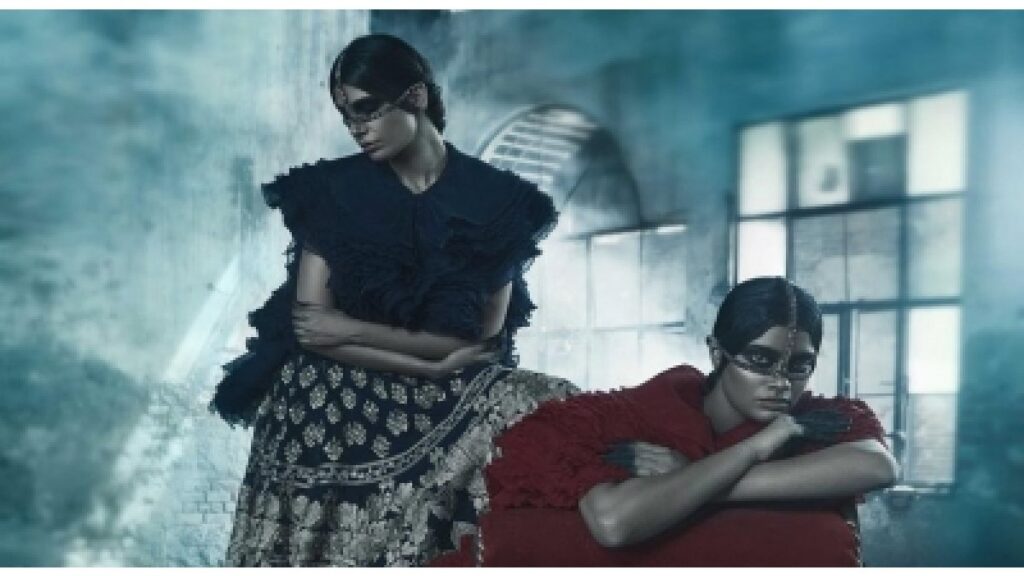 Hints of androgyny and lashings of glitter, Siddartha Tytler’s ‘Cult’ couture collection was the epitome of confidence and independence. The Lotus India Fashion SS21 week saw a renowned transformation from chic to experimentative couture. The outlandish digital show gave birth to a new sense of ethnic wear with a dramatic gothic touch.

The collection was an amalgamation of western and traditional styles including gowns for women and suits for men. The silhouettes were charmingly reimagined with contemporary sarees and lehengas. The menswear was equally noteworthy with suits, sherwani and sequined suit kurtas.

Using bold colours and sharp silhouettes, the collection made a strong statement which was modified with pliable fabrics like crepes, wool, malmal, cotton, linen and silk. The valorous and striking palette of black, silver and metallic shades set against the dark, gloomy backdrop emphasised the collection. The designer showcased incredibly dramatic headdresses with black lace, feather and glitter, black roses, adding love and romance to the collection.

Black smudge eyes, sleek hairstyles and pale lips, Siddartha Tytler, has portrayed beauty beyond imagination. Scroll below to take a look at how ethnic and grunge collaborated into this fine collection.

A bold showcase of feminine attributes with contemporary cuts and metallic prints were the exquisite couture pieces which added spark to the whole collection. This ensemble personified craft in an alluring statement, through detailed ornamentation of applique work with courageous striking tinge. It takes lots of guts to be comfortable in one’s skin, and Siddartha Tytler showcases that with the virtue of these powerful and primitive looks. Scarlet red, bottle green and classic black, the fusion of gothic glamour cult represented the whimsically romantic darkness conjoined with this ruffle and extraordinaire.

Finding beauty in the darkness with a colour palette of black, grey and silver brought life to the whole line up in an extraordinary way. Printed straight cut suits are the bold statement of the season. Grandeur elucidation of the cult theme, the fashion film made heads turn with this show stealer floor-length tulle and the evident feather wing.