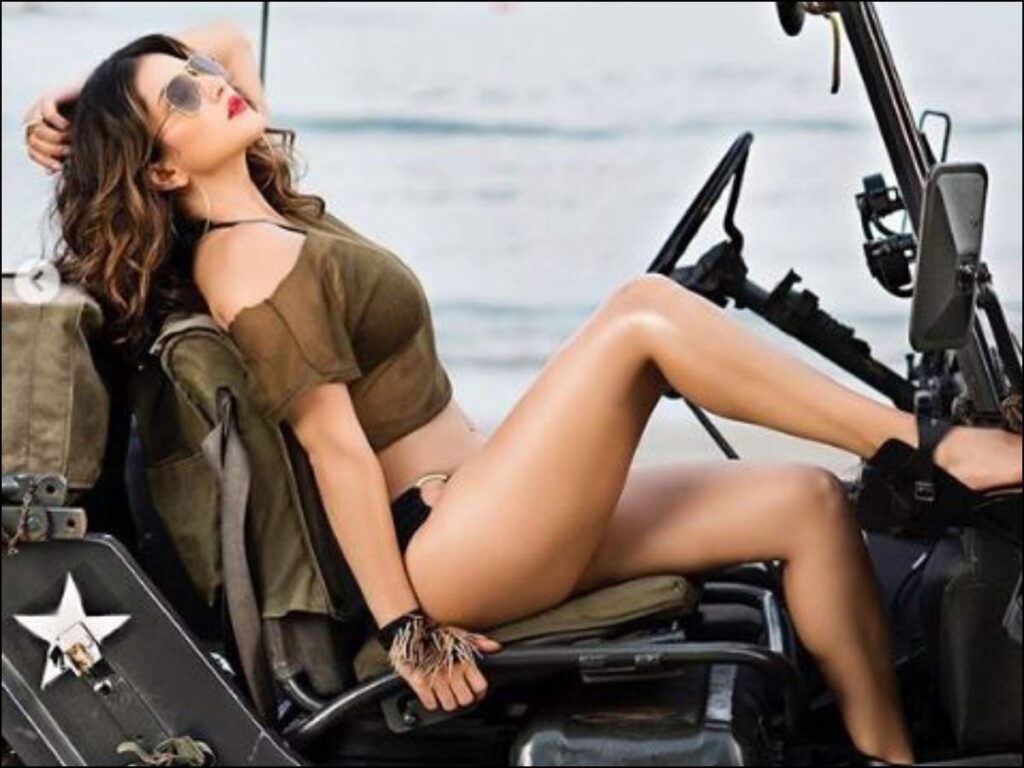 Sunny Leone on Her Told Stories

Apart from her acting career, she has been part of activism campaigns including the Rock ‘n’ Roll Los Angeles Half-Marathon to raise money for the American Cancer Society and has also posed for a People for the Ethical Treatment of Animals (PETA) ad campaign with a rescued dog, encouraging pet owners to have their cats and dogs spayed and neutered.

Karenjit Kaur Vohra was born on May 13, 1981, in Sarnia, Ontario, to Sikh Indian Punjabi parents. As a young girl, she was a self-described tomboy, very athletic and played street hockey with the boys.

Although the family was Sikh, her parents enrolled her in Catholic school as it was felt to be unsafe for her to go to public school. When she was 13, her family moved to Fort Gratiot, Michigan, then to Lake Forest, California, a year later, fulfilling her grandparents’ dream that the family be together in one place. She had her first kiss at 11, lost her virginity at 16 with a basketball player, and discovered her bisexuality at 18.

When picking a name for her adult career, she has said that Sunny is her real name and Leone was picked by Bob Guccione, former owner of Penthouse magazine. She posed for Penthouse magazine and was named Penthouse Pet of the Month for the March 2001 issue, followed by a feature in the Holiday 2001 edition of Hustler magazine as a Hustler Honey. She has also appeared in other magazines including Cheri, Mystique Magazine, High Society, Swank, AVN Online, Leg World, Club International and Lowrider, while her online credits include ModFX Models, Suze Randall, Ken Marcus and Mac & Bumble.

In 2003, she was named “Penthouse Pet of the Year” and starred in the video Penthouse Pets in Paradise alongside Tera Patrick and Kyla Cole. In 2005 Adam & Eve appointed her as their West Coast Internet Sales Representative.

Leone’s first mainstream appearance was in 2005 when she was a red carpet reporter for the MTV Awards on MTV India. She has also had a cameo in the film The Girl Next Door, performed in Ja Rule’s video Livin’ It Up and a video for Kidd Skilly. Other credits include E!’s “Wild On!” and the Sundance Film Festival’s ‘After Dark. Leone was a contestant in the second season of the Fox reality show My Bare Lady 2: Open for Business, in which a group of adult actresses were given classes and training on how to pitch investment ideas and competed for success in the business world. In addition to filming her scene for Debbie Does Dallas in 2007, Leone was also part of a Showtime documentary of the same name detailing the production of the movie and the personal lives of its stars.

She indicated that for the right price she would seriously consider a career in Bollywood. She was courted by Indian directors in the past but felt uncomfortable with the roles that she would have played. Director Mohit Suri reportedly asked Leone to play the lead role in his film Kalyug, but instead cast Deepal Shaw as he could not afford Leone’s $1 million acting fee. She has mentioned that Aamir Khan is her favourite Bollywood actor and that over 60% of her fans are from South Asia.

Leone has made appearances at events such as the 2002 SEMA International Auto Salon, the 2002 Extreme Autofest Pomona and the 2006 World Series of Poker in Las Vegas. Sunny has also been the hostess at events in clubs like the Mansion in Miami and the Highlands in Hollywood.

In 2005, she was mentioned in Forbes magazine for a story on Vivid Entertainment. Leone has also been featured in mainstream publications like FHM, Front and Jane magazine. In 2007, along with the other Vivid Girls, she was seen in a 48′ high holiday Billboard in Times Square at W. 48th Street and Seventh Avenue. Leone is also one of the Penthouse Pets who appears in the 2007 video game Pocket Pool. She was also featured in a coffee table book titled Naked Ambition: An R Rated Look at an X Rated Industry by Michael Grecco.

In 2011, she participated in the Indian reality series Bigg Boss 5, entering the house on day 49. However, she refused to divulge her porn star status and replied to fellow house-mate Pooja Bedi that she was a model and a TV star in America for the last ten years or so. It was reported that she caused a stir in the larger populace with her Twitter feed gaining 8,000 new followers in just 2 days and Google saying searches for her experienced a “breakout”. There were also complaints lodged with the Indian Ministry of Information and Broadcasting alleging that the Colors TV channel was promoting pornography by having Leone appear on the show; among those who filed are the Indian Artistes and Actors Forum and Anurag Thakur, member of Lok Sabha and head of the Bharatiya Janata Party’s youth wing. She was evicted on Day 91.

Sweet Dream is a collection of 12 short stories written by Sunny Leone. They were published digitally as an e-book and launched on 22 April 2016 by Juggernaut Books through their mobile app. A story was made available on the app at 10 pm every night. A 200-page paperback edition was also launched in 2016.

The work was well received by the Hindustan Times, which commented, “Sunny’s stories are relentlessly optimistic. The characters are not complicated or unpleasant and exist in a world that veers on the border of Valentine’s Land with its floating pink hearts and soft focus lighting.”

Sunny Leone in an interview with Press Trust of India explains that the book is written from the perspective of both men and females, as well as being written for both genders but mainly for women; “I wrote these stories, from what I thought a woman would like to read.” Sunny Leone adds that it is “the first time (she has) written something like this.” In the interview, she mentioned how Juggernaut Books had come to her with this idea of writing the book.

Sweet Dreams was Elle’s ‘Book of the Week’ in April 2016 and in the review they go on to write “don’t go looking for creative fantasies or fetishes; as a writer, Leone is playing safe.” Another review in Bollywood Hungama goes on to note if there was any real contribution from Sunny herself towards the book other than her picture on the cover. The review goes on to say that there is “no note by (the) author, acknowledgements section, or forward from some known entity.”

Leone has a strong interest in health and fitness and has been featured in several mainstream fitness publications. Leone has modelled fitness clothing for the sports brand Fantasy Fitness and shared that she keeps her body in shape by working out as much as she can despite her busy schedule and as quoted in Men’s Fitness magazine, “I try to eat very healthy – lots of vegetables, drinking my milk every day.”

Although bisexual, she has stated that she prefers men. Sunny Leone had dated Indian-Canadian stand-up comedian Russell Peters up until they broke up in 2007. Leone was then dating Matt Erikson, a vice-president of marketing at Playboy Enterprises. After being engaged to Erikson, they broke up in 2008. She mentioned in an interview at the start of 2011 that she was married to Daniel Weber, an American actor, producer, and entrepreneur. During her stay in the Bigg Boss house later that same year, Leone indicated that she had married; Leone said she “purposely arrived late” to their first date as she was not impressed with him, but he changed her mind by sending 24 roses to her hotel room.

A 2008 Eye Weekly article reported that “Leone does her best to maintain a link to Sikh traditions, even if more in theory than in practice. But she’s unlikely to disavow her career path due to religion” and that Leone said “Girls will leave the industry claiming that they found God. Well, the fact is, God has always been with them the entire time.” In a 2010 interview, she said

It’s a community-based religion. You walk into a temple and you’re greeted with the utmost respect… But, just like any religion, it doesn’t want you to shoot adult material. I mean, I grew up going to the temple every Sunday. When my parents found out they knew my personality which was very independent. Even if they tried to stop me or tried to steer me the right way they would have lost their daughter. I’m too headstrong. And it wasn’t a plan. It just happened and my career and everything just kept getting bigger and bigger.

1 thought on “Sunny Leone on Her Told Stories”