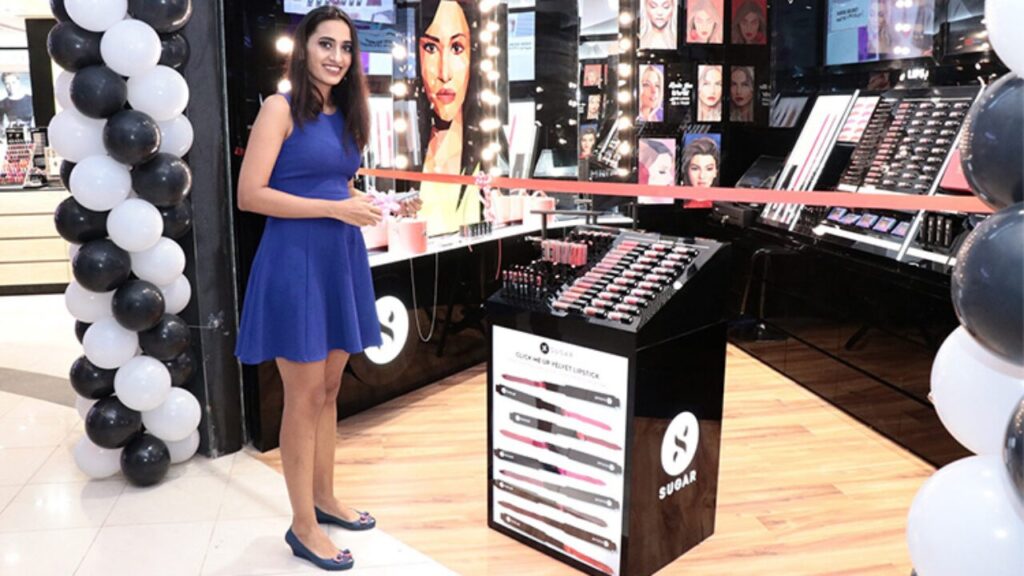 Shark Tank India has been nothing short of a phenomenon, affording a fresh foil of celebrity to female entrepreneurs. Among other noteworthy highlights from its debut offering is the fact that two-thirds of its female panel is dominated by self-made names from beauty: Vineeta Singh, CEO and co-founder of SUGAR Cosmetics, and Ghazal Alagh, co-founder of Mamaearth and The Derma Co. While both of them have successfully carved their niche in the industry, their stories couldn’t be more different—Singh famously turned down a one-crore job offer with Deutsche Bank to start her own cosmetics company. Elsewhere, Alagh was inspired to create her own brand after failing to find natural products for her son’s skin condition.

Both names agree that serving on the investor panel of Shark Tank India is their way of giving back to the start-up industry, and Alagh recalls how she almost didn’t take up the role. “While I was excited initially, I was a bit apprehensive as we had just found out that we were pregnant with our second child. I did entertain the thought of not going on the show but almost instantly, I decided that this was an opportunity for me to break the stereotype that pregnant women need to put their dreams and ambitions on hold during this period,” she reminisces. The payoff for the decision came in the form of being able to lend a helping hand to budding female entrepreneurs from around the country—a heartening amount of 48% of all pitches on the show were made by female co-founders. “It was extremely encouraging to see women from all life stages come together on the show, including a mother- and daughter-in-law duo. This is truly the new India,” she observes.

Singh seconds the sentiment and adds that this is an encouraging change for an industry that has been gridlocked by multi-national corporations for the longest time. “For the longest time, the biggest players in this industry didn’t cater specifically to the Indian audience or skin tones. However, beauty is not a one-size-fits-all category and times are changing, leaving room for a new wave of female entrepreneurs who understand the market requirements and are working on addressing this gap in the market,” she explains.

Today, both sharks agree that the primary motive behind signing up for the show was to help female entrepreneurs avoid the challenges that they had to learn the hard way. For Singh, this means helping young businesses navigate the minefield of working capital. “SUGAR Cosmetics started with little funding, and I still remember a period when we were out of stock and yet couldn’t order a new batch of products because we were short on rolling capital,” she says. Alagh agrees, and adds, “The objective is to utilise all my learnings and deploy them at the right moment This is what excites me about being a part of this fast-changing start-up ecosystem led by women.”

Among this new wave of female entrepreneurs is The Sass Bar, an artisanal bath and body label founded by Rishika Nayak, which received a 50-lakh investment in exchange for 35% equity for Alagh and Anupam Mittal. The Mumbai-based entrepreneur says, “People have called my business a hobby and others have called it a temporary fad, but I now have customers from all over India to prove otherwise.” While she would have preferred to hold off on outside investment for another two years, the rampant plagiarism of her brand offering served as a cause for concern. “I realised that the only way to beat this would be to become so accessible that my brand would come to mind instantly within this space. I hope to now scale what I once started on my own with strategic guidance and insights from Anupam and Ghazal,” she adds.

While the show concluded after a 35-episode run, Alagh and Singh have since been in touch with the entrepreneurs to support the execution of their newly acquired funds. “During my time in the industry, I have understood the importance of dreaming big, taking bold decisions and being patient in the results. It is a privilege to mentor these budding entrepreneurs by demystifying the ups, downs and other nuances of building a meaningful business,” Singh concludes.